The talk radio icon's chronic inaccuracy and lack of accountability were never called out as he rose to national prominence.
Steve Rendall

Rush Limbaugh died on February 17, leaving behind a legacy of lies, bigotry, science denial and conspiracy mongering—as well as a media and political system significantly transformed by his influence.

Limbaugh was a talented broadcaster who forged an intimate connection with his audience. Since he launched his nationally syndicated radio show in 1988, his success has helped to inspire an army of lesser talk radio clones, fueled an explosive growth in right-wing media generally, and introduced a new era of conservative commentary and politics steeped in aggrieved resentment and a willful disregard for facts.

Limbaugh’s influence can be seen in everything from 1994’s “Gingrich Revolution” to the Bush administration’s baiting of “reality-based communities” to the Tea Party movement to the January 6 storming of the Capitol. It is no exaggeration to say that the Donald Trump movement is in many ways the culmination of the project Rush Limbaugh has been working on for more than three decades.

By the time FAIR published its pioneering 1994 report on Limbaugh, “The Way Things Aren’t: Rush Limbaugh vs. Reality” (Extra!, 7–8/94), his show was already the biggest thing in talk radio, Ronald Reagan had dubbed him the leader of the conservative movement, and George H.W. Bush had carried Limbaugh’s luggage to the White House Lincoln Bedroom. GOP leaders would soon credit the talk radio host with helping flip the House in their favor in the 1994 elections.

Our report provided dozens of examples of Limbaugh’s penchant for falsehoods, like his claims that bra size is inversely correlated with women’s IQs, that there is “no conclusive proof” nicotine is addictive and that “the poorest people in America are better off than the mainstream families of Europe.” 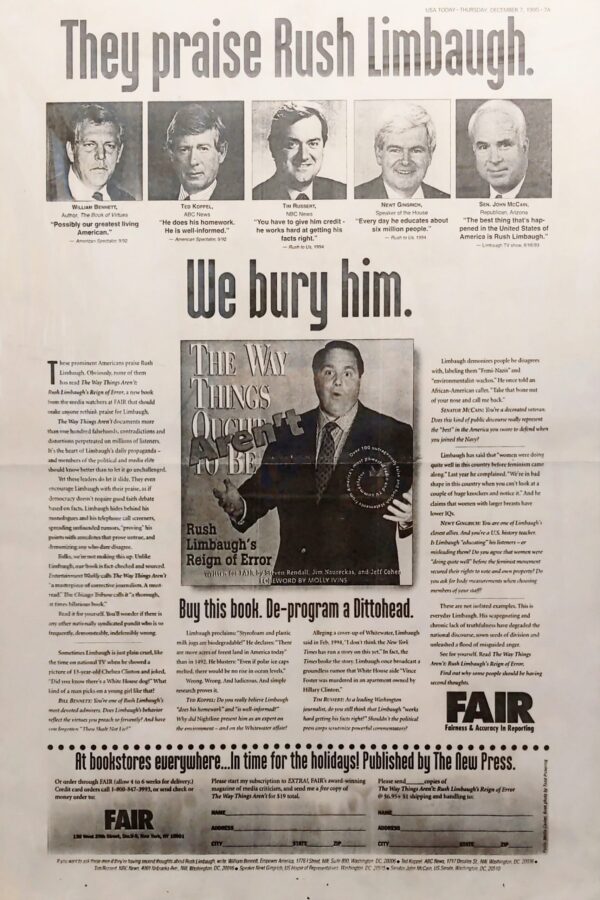 But despite his power and connections, the fact that Limbaugh was a serial dissembler seemed to come as a surprise to establishment media, who treated the report like a breaking story. A clipping service FAIR hired for the occasion found more 1,200 outlets had published an Associated Press story (6/29/94) on our report, while dozens more stories ran from other wire services and newspapers. Why had Limbaugh escaped serious scrutiny for so long?

One explanation is that many of these outlets were complicit in Limbaugh’s rise. As we wrote at the time (Extra!, 7–8/94):

Limbaugh’s chronic inaccuracy, and his lack of accountability, wouldn’t be such a problem if Limbaugh were just a cranky entertainer, like Howard Stern. But Limbaugh is taken seriously by “serious” media—in addition to Nightline, he’s been an “expert” on such chat shows as Charlie Rose and Meet the Press. The New York Times (10/15/92) and Newsweek (1/24/94) have published his writings. A US News & World Report piece (8/16/93) by Steven Roberts declared, “The information Mr. Limbaugh provides is generally accurate.”

A year later, FAIR expanded the report into a book, The Way Things Aren’t: Rush Limbaugh’s Reign of Error, listing even more Limbaugh falsehoods, and much more on his racism and bigotry towards women, LGBTQ people, the poor, the homeless and people living with HIV.

For many, FAIR’s report and book marked Limbaugh for the first time as a mendacious bigot. David Letterman dubbed him “The Lyin’ King,” House Speaker Gingrich stopped appearing regularly on his show, and media invites became less frequent. When Limbaugh was being considered for a job as a color commentator on ABC’s Monday Night Football program, an LA Times op-ed (6/7/00) by myself and FAIR founder Jeff Cohen reportedly played a role in ABC ultimately denying Limbaugh the job.

Based on my long years of listening to talk radio, Limbaugh’s mastery of  the medium owed much to his obvious talents—his voice and his usually light entertaining manner—and to the intimacy of a medium in which listeners, typically alone when they tune in, develop a deep if one-sided personal connection to the hosts.

And here was where Limbaugh set himself apart from other talkers. As he projected a view of himself as a victim, he also nurtured the same aggrieved sensibility in his listeners. If you listened for any amount of time, the “Rush and me against the world” vibe came through in both host and callers.

One early example of this was Rush’s false claim (Extra!, 11–12/94) that critics were campaigning to silence him through reinstatement of the Fairness Doctrine, which he referred to as a “Hush Rush” bill. In reality, the doctrine was never a threat to talk radio hosts, who by virtue of taking calls from listeners with various perspectives were seen as naturally complying with the FCC rule. (The rule was widely misunderstood as requiring “equal time,” which it never mandated—Extra!, 1–2/05.) Over its entire history, not one FCC judgment involving the Fairness Doctrine ever concerned itself with talk radio, which flourished locally under the doctrine for decades before its 1987 scrapping.

If Limbaugh lost some mainstream cachet because of our criticism, by the early ’00s he had served a vital purpose. The right had built up its own outlets, so conservatives didn’t need the validation of the establishment to thrive. The conservative media establishment that the right dreamed of since the days of Richard Nixon (Extra!, 3–4/95) and the Powell Memo had been realized. The year after our LA Times op-ed, Fox took over first place in cable news, and has remained there ever since. The new conservative media firmament adopted the language of grievance and resentment from the man who showed how to use establishment scorn as a recruiting tool better than anyone until Donald Trump.

It may be too simple to say that without Limbaugh, there would be no Trump, but before Limbaugh there wasn’t really a conservative movement; there was an alliance of convenience between the religious right and pro-business conservatives, who disagreed on several issues (FAIR.org, 3/6/18). Limbaugh’s show taught these disparate parts of the right that they should be one big happy family. Trump took Limbaugh’s lessons to heart, and to the White House; that may be Limbaugh’s most lasting legacy.

This article first appeared at FAIR and is republished with permission.